Specops Gpupdate is a FREE tool that makes your life as an administrator much easier by providing operations such as update of Group Policy Objects, remote restart, wake on lan, WSUS client update and remote shutdown.  That is straight from the Specops website and it is the truth.  I was introduced to this handy little application by a coworker that uses it and it makes his life a little easier.  And as we all know, making things easier is what a good System Administrator does.  Anyhow Specops Gpupdate is a freeware tool that can be downloaded from http://www.specopssoft.com/web/specops-gpupdate.aspx .

Here are the features of Specops Gpupdate.

Once downloaded installing the application is easy with the standard Windows MSI install.  However if you didn’t do a little reading in the supplied guide your install will not work.  Once installed on the Windows DC you need to go to the Specops directory and run SpecopsMenuExtension.exe /add .  I don’t think that is the exact name of the file, but once you install it you will have access to the guide and will be able to look up the name.  I installed it at work on our servers and don’t remember the exact name but this is close.  So run this on the domain controller and it will add the commands to the menus in Active Directory.  After going to work I looked up the command and The actual command is SpecopsAducMenuExtensionInstaller.exe /add .

I really like this program because of the WOL or wake-on-LAN feature.  We run a sites that have quite a few remote machines and it would be so nice to just send out a WOL command then having to go to the room or a different building to turn back on a computer that someone shutdown.  But it also has the ability to restart and shutdown computers as well.  The last feature, the gpupdate is nice when you make Group Policy changes and you can send out the update straight from the AD users and computers mmc.

Operation is  pretty simple, just open the Active Directory Users and Computers Microsoft management console or mmc, and right click on the OU with the computers you want to work with.  You can also perform the functions on individual machines instead of the whole OU.  It will open the menu the looks like the following screen shot. 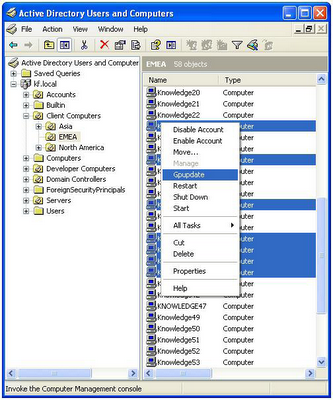 Here is shows all of the options added by Specops.  One thing I did find is that all of the computers have to be members of the DHCP server for the functions to perform correctly.  I like to use the WOL and when the computers were off and had static IP addresses I could not get them to turn back on unless I made them DHCP reservations and added their MACs.  Basically it doesn’t work so hot with static IPs.  This was not a problem for us because our workstations are DHCP clients and only the servers are static so you may want to check this fact out before you add it to a production network.  Also don’t forget to turn on the WOL in the computers BIOs or the WOL function will not work anyway.

Once you select the machines to perform a task you will get a little menu similar to the following screen shot.  This one is for a restart, but the will vary slightly depending on the function being performed. 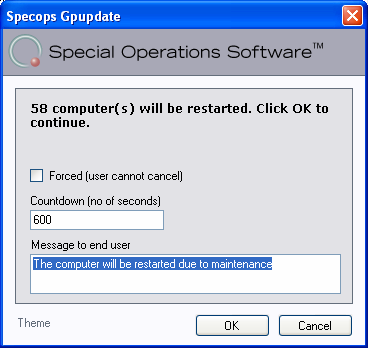 Once this is sent out you will get another bar graph that will tell you the number that has failed, was successful, or was Offline or blocked by a Firewall.  I don’t have a screen shot of this but it is a nice little window that lets you know if there was any problems.  This little FREE application saves me and the rest of our System Admins a great deal of time running around and turning machines back on.  The other features are nice touches but we already have scripts in place to handle these functions, so the admins don’t use them as much.  So check it out and  it will save you some time and effort.  Plus anything that makes work better is all good in my book.