eBox Technologies has released version 1.4 of its Linux server for small to medium sized enterprises.  eBox Platform found at http://ebox-platform.com, is a unified network server that offers easy and efficient computer network management for small and medium enterprises networks.  eBox Platform can act as a Network Gateway, a Unified Threat Manager, an Office Server, an Infrastructure Manager, a Unified Communications Server or a combination of them.  All these functionalities are fully integrated and therefore automate most tasks, prevent manual errors and save time for system administrators. This wide range of network services is managed through an easy and intuitive web interface. As eBox Platform has a modular design, you can install in each server only the necessary modules and easily extend the functionality according to your needs.  Besides, eBox Platform is released under a free software license (GPL). The main features are:

This Ubuntu based server has a great deal of capabilities, which truly does make it perfect for the small to medium business.  I did find the configuration a little tedious but I was just playing around and didn’t have a real use for the machine.   Anyhow it can be setup to a few predetermined roles: Infrastructure, Gateway, Office, Unified Communications, or Unified Threat Manager.  These simply are bundled packages that will be installed from a default menu.  There is alway the option to install packages as you see fit. The function of each role are as follows.

eBox Core (part of all installations)

There are a few things that I really like about this distro and the first would be the SNORT IDS.  I have installed and configured SNORT before and think it is a very good IDS.  It is a rules based system like most, but I don’t believe it has all of the functionality of a SNORT installation.  Plus I was not able to find the area where you update the signatures for the IDS.  But all in all having it as part of the server is good for network security.  Here is a picture of some of the rule you can configure. 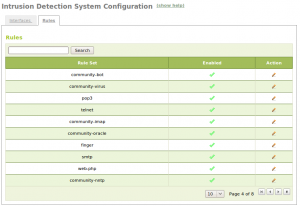 Another feature is the web interface.  It is easy to use and not a bad design.  I do especially like the monitoring tab that allows you to see all of the network traffic and what services are running on the machine.  It also allows to restart these services from the same interface.  Here is a pic of that interface. 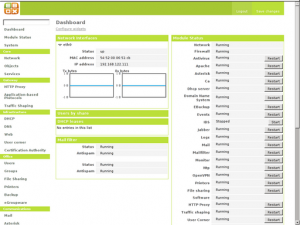 The last part is the VOIP support with Asterisk.  This gives you VOIP support for you internal network and it will pass SIP traffic if you have and external service for VOIP calls.  It also has the ability to set up meeting rooms or conference calls, so everyone can dial in to conduct meetings.  Here are some pics of the interfaces. 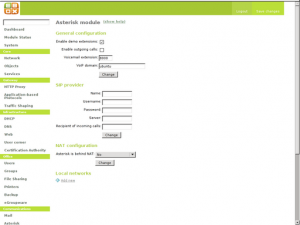 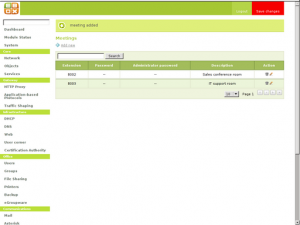 The installation was straight forward and I had no trouble getting it up and running.  While there is a GUI it is very limited and is primarily so you can bring up Firefox to use the web interface.  I was going to install eBox and deploy it into my network but I would have to drop my web servers and spend time getting everything up and running again.  So with me not wanting to break something that is already working fine, I decided not to get a full test out of an eBox server.  But overall it is pretty impressive and brings loads of functionality.  So if you are trying to set up a network you may want to check out the abilities of eBox and maybe even save some money in the long run.  I couldn’t use it on my network but it may have everything your looking for, eBox can be downloaded from http://www.ebox-platform.com/.  Here are a few more screen shots of the web interface. 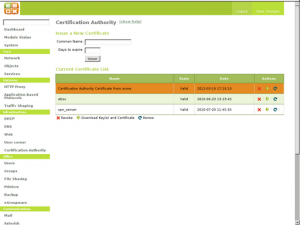 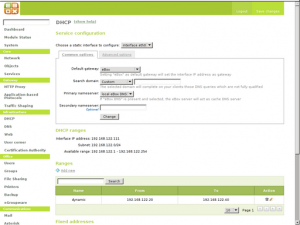 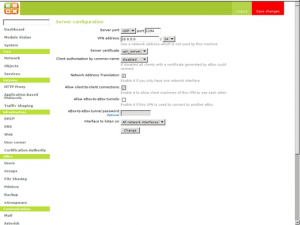 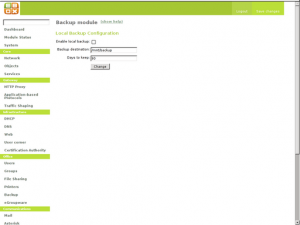 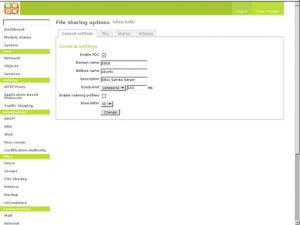 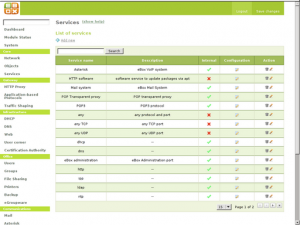