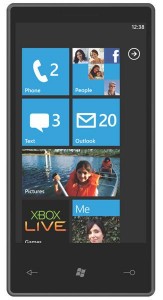 Microsoft on Monday announced its next-generation mobile operating system Windows Phone 7 Series, which will bring together the Zune multimedia experience and Xbox Live gaming to mobile phones worldwide.  The phone OS is a mix of the Zune and the Windows Phone 7 series interfaces.  I don’t live on my phone so a pretty standard multimedia phone works fine for me, but the part of this phone I don’t get it the Xbox Live Marketplace.  This OS lets you see your Live profile along with avatars and game achievements.  You can also download titles and games from Xbox Live, so I am guessing it is geared towards the younger and gaming crowd.

It also has Office, OneNote, and SharePoint work spaces allowing users to do pretty basic reading and editing of documents.  My current phone has the same abilities but I would not do any real editing due to the lack of true functionality on a small screen and keyboard of a phone.  Windows Mobile OS failed to become mainstream so we will have to see if this will take off or bomb.   These phones will have to be stunners to take market share from the iPhone or even the Google Android based phones.  We will have to wait for them to make their appearance.  Will they be worth it?  We will have to wait and see.