Desktop virtualization for Windows and Linux 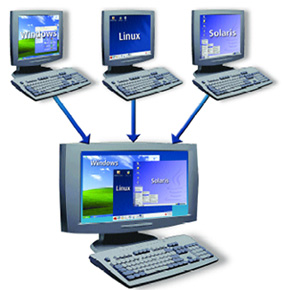 I recently read an article that talked about desktop virtualization and how these three stacked up to each other.  The article is from InfoWorld and was very interesting.  Part of the article follows:

VMware Workstation has long been the gold standard of desktop virtualization. Powerful and sophisticated, yet easy to use, this pioneering tool sets the bar for solutions addressing this niche product category. In fact, VMware Workstation has been so far out in front for so long, it’s hard to imagine a world in which this bellwether product isn’t the class leader in virtually every category.Yet in the past few weeks, the unthinkable has happened: VMware shipped a new version, VMware Workstation 7, and it wasn’t the class leader, at least in terms of scalability — and perhaps ease of use or, for that matter, overall value.

In terms of scalability, VMware has been eclipsed by Sun Microsystems, which is now shipping a version of VirtualBox that supports up to 32 virtual CPUs per guest OS. Similarly, VMware’s lead in usability is being challenged by Parallels, which has finally brought the ease of use of its award-winning Parallels Desktop for Mac product to the Windows platform. And since both solutions are significantly cheaper than Workstation 7 (Parallels Desktop 4.0 for Windows retails for $79.99, while VirtualBox is completely free), they’ve backed VMware into a corner that seems to be getting smaller and smaller.  (Kennedy, Infoworld)

I am not an expert on virtualization but I have been using it for almost four years for various things, such as network testing, trying out new operating systems, and test security measures.  I have Vmware 5,6, and 7 and I agree that they are some of the best virtualization programs that are out there.  However it does cost and you can get a lot of the same features from a free product such as Virtualbox or even Microsoft Virtual PC.  I have recently started using Sun’s Virtualbox and really like it.  First off it is free, and has almost every feature that VMWare Workstation.  The one thing I really though was cool was the ability to allot memory for the video of the virtual machine.  I had not seen that before until I used Virtualbox and then later with Workstation 7.   If I didn’t already have most of my virtuals built in Workstation I would use Virtualbox for everything.  Although VMWare virtuals are suppose to be able to run in Virtualbox, I have not tried it yet.  But I do use other applications such as ESXi server and using Workstation makes uploading easier.  I also use Virtual PC which isn’t even in the ball park with the others, but I have used it in some of my Microsoft classes and have come to see some of the usefulness it posses.    So if you have not tried out virtualization give one of the free applications a shot, such as Virtualbox or Virtual PC.  You will find it is really a great way to practice your computer skills and even testing future software implementations.  The following are some of the features of each application.

I didn’t say anything about Parallels Desktop 4 because I have never used it.  It is a Mac application.